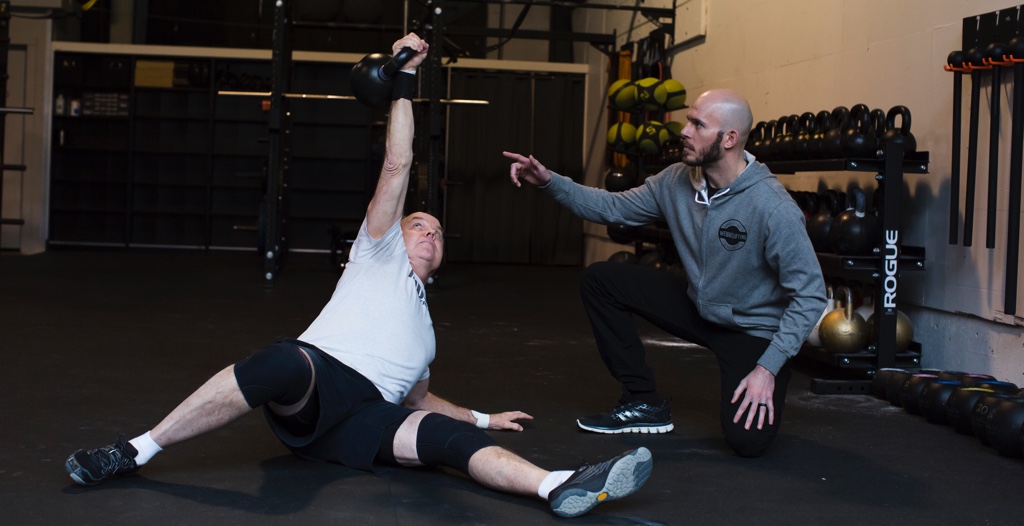 Tony is a co-founder and the head BJJ instructor of Industrial Strength.  His credentials include being a Certified Senior Instructor with StrongFirst, a 2nd degree black belt in Brazilian Jiu Jitsu, holding a BS in Exercise Science, and over fifteen years of full time experience in the fitness industry.

On top of coaching and running the gym full time, Tony has written articles published by Functional Movement Systems (FMS), Onnit, and StrongFirst. Additionally, he is a multiple-time presenter for clinics/seminars for the National Strength & Conditioning Association, Concordia University, and Pacific University, and has been an assistant instructor at many StrongFirst workshops and certifications.

One of Tony’s initial objectives for Industrial Strength was to merge two of his biggest passions: strength & conditioning training and Brazilian Jiu Jitsu.  So, when he is not coaching you can probably find him lifting or rolling on the mats. As you might expect, with interests like these he enjoys challenging himself, and in the spirit of that he has taken up a new martial art – judo (currently he is a brown belt).  Outside of the gym and off of the mats he enjoys relaxing with his two Victorian bulldogs (Suh and Dimas), meal-prepping food for the week, and of course spending time with his amazing wife Mira.

*The StrongFirst School of Strength certifies fitness professionals in various modalities, including becoming a certified kettlebell instructor.  The workshops where people go to earn these credentials are of course taught by someone (typically a small team of 2-4 instructors) – and as Certified Senior Instructors Tony and Mira are occasionally the ones leading / teaching these workshops*

Mira Gracia is a native New Yorker who moved to Oregon in 2000 to search for a better quality of life and an environment that supported her active lifestyle and passions. Beginning her athletic endeavors, in Tae Kwon-Do learning from her father and 8 years of competitive gymnastics as a child, she now focuses her efforts in strength training with kettlebells and barbells and competitive olympic style weightlifting.

Over the last 15 years her passion, focus and practice of strength training has transformed into a journey to empower people globally. Being a first hand witness to the powerful physical, mental and emotional outcomes strength training enables, is why she advocates its importance.

Mira currently works with all levels from novice to advanced in an effort to build lasting results, durability and resiliency in her students.  She is most recently the 2022 Masters World Champion in 55Kg / 55YO class, is an Advanced Sports Performance Coach and Club Coach with the USAW, a StrongFirst Certified Senior Instructor (including Level II kettlebell,  Barbell and Bodyweight instructor). In addition to being the co-founder of Industrial Strength, she is the head coach for the weightlifting (aka “Olympic Lifting”) program and competition team.

She is also a passionate supporter of continuing education to further enhance her tool set. Some of her most recent experiences have been Second Wind by StrongFirst with Pavel Tsatouline and The Art of Coaching with world renown coach Ursula Papendrea.

Mira is also passionate about moving the needle forward in the areas of diversity, equity and inclusion within the USAW. She currently sits on the DEI Commission as they work towards creating safe spaces and opportunities for the under served and under represented communities. As well as being on the board for the Pacific North West Weightlifting State Organization.
On her off days Mira enjoys many of Portland’s fine coffee brews and enjoying the Pacific Northwest with her husband Tony and two Victorian bulldogs Sensei Suh and Dimas AKA Mr Booz.

*The StrongFirst School of Strength certifies fitness professionals in various modalities, including becoming a certified kettlebell instructor.  The workshops where people go to earn these credentials are of course taught by someone (typically a small team of 2-4 instructors) – and as Certified Senior Instructors Mira and Tony are occasionally the ones leading / teaching these workshops*

Adam believes the body is a linked, interconnected unit, and needs to be trained as such for optimal human performance. His first priority as a coach is getting his students to move well, then to add strength using StrongFirst principles. He believes kettlebell training is unique because it builds useable, functional, real world strength. And after you have that, everything else is in life is easier.

Playing sports and strength training has always been apart of Adam’s life. He attended Western Washington University where he was the quarterback of the football team. Because of his athletic background, he got involved in strength training when he was in high school and continued into college. A few years back, a friend let him borrow a couple of kettlebells and he has been hooked ever since. Adam appreciated the details and depth of kettlebell training and its simple yet sinister approach. This motivated him to achieve his SFG kettlebell instructor certification in 2015.

Prior to moving to Portland, Adam has spent the past few years living on the Olympic Peninsula and working at a Naval Base gym, he also instructed kettlebell classes at a small studio. He gained experience working with everyone from the senior population to elite military personnel.

Adam has lived his entire life in Washington, and is originally from Longview. He loves the Pacific Northwest and all the beauty it has to offer. Besides spending time in the gym, Adam enjoys pretty much anything that is active, athletic and outdoors.

Casey is originally from Southern California and while he has lived in many different cities, Portland has always been the place he calls home.

His first exposure to kettlebell training was during his enlistment in the US Army. He was immediately hooked and after moving back to Oregon when his enlistment was finished, he became one of the very first certified kettlebell instructors in the Portland area. No matter what his current training goals are, the kettlebell always plays a critical role.

He also loves body weight and barbell training with the power clean and handstands being some of his absolute favorite moves for building strength, coordination and power.

Casey is a dedicated martial artist and holds the rank of brown belt in Jiujitsu and black belt in Judo as well as having over nine years of training in Thai Boxing. In addition to his training he has fought in boxing, kickboxing and mixed martial arts matches and is still an active competitor in both Judo and Jiujitsu.

When he’s not in the gym or on the mats, he can be found enjoying the incredible craft beer scene in PDX as well as spending time with his amazing wife Jenn.

Ella Riddle was born in Leeds England and moved to Oregon with her family when she was 16.  Having played tennis since she was 4 years old she commenced her studies at Linfield College (soon to be Linfield University) in 2015 where she played for the women’s tennis team and completed her B.S. in strength and conditioning. During her 4 years playing on the women’s tennis team Ella became a 3 time All American , West Coast Freshman Player of the year, West Coast Senior player of the year and Linfield 2018 Female athlete of the year.  Her studies at Linfield inspired her to further explore the field of human performance and after graduation Ella moved back to England to complete her Masters of Strength and Conditioning.

Throughout her Masters program Ella was able to work with several sports teams including the Leeds Rhinos Netball team and Leeds Beckett Women’s Tennis team. Through her studies Ella developed a passion for working with female athletes and specialized in this during both her practical applications and final dissertation. Working with females to develop confidence and embrace their athleticism reminds Ella of her first introduction to strength and conditioning and how it helped her.

Currently Ella is the Linfield women’s tennis assistant coach and their head strength and conditioning coach. She supports them on their athletic journey and loves helping them achieve their individual goals.

On her days off Ella enjoys finding new hikes with her husband or watching a cheesy movie with a glass of red wine and her cat!

Cory was born and raised in Oregon where he played multiple sports growing up. He was exposed to basketball, football, soccer, wrestling, and gymnastics until finally deciding to persue gymnastics in which he competed at a regional level. Sports have always been a large part his life and in 2009 began training Brazilian Jiu Jitsu.

This lead him to question the whys behind the training methods and fueled his quest to become a better athlete and coach. He then earned his Associates of Applied Science degree in exercise science, and while in school he put together training protocols that led him to win his first amateur mixed martial arts bout. He continued his education with Functional Range Conditioning, where he teaches the importance of body control and longevity. His journey and continued growth will always continue as he strives to provide his students and with the best experience for whatever fitness journey they are on.

Outside of the gym, he enjoys camping , fishing, reading, and dancing!

Think you have what it takes to join us?

Learn About Joining Our Team
Go to Top